Last weekend, I joined several million of my friends and finally went to go see The Hunger Games. It was fun! I mean, I am always a little meh when it comes to book-to-film adaptations, but I heartily enjoyed myself.

One thing I was especially looking forward to was the archery. As a former archer, I'm always anxious to see how my sport is portrayed on film, and The Hunger Games guaranteed some bow and arrow action.

A few weeks ago, I posted a (very, very, very long) overview of how to write about archery for your YA story. It covered the basics of equipment and shooting and also debunked some frequent myths. In that same vein, I thought I'd take a look at the movie's take on archery.

First, my cred: I shot for five years while I was a teenager, and during that time, archery was my biggest passion. Like, wake up every morning at 5am to shoot for a few hours before school kind of passion. My weekends were spent in competition, my summers were spent 5-days-a-week training. I had a goal to get to the Olympics, but when the competition to get to the trials was held the same day as my high school graduation, I figured the Olympics come every four years, but I'll only graduate once.*

The point is, I know my archery. So! To get to the movie: how did it do?

I would give the movie a solid B. Mostly, the filmmakers did a good job portraying everything, and there were only a few moments that made me snort into my Cherry Coke. But, as an archer, I didn't think Katniss did anything too special or amazing and I would have liked to see more cool trick shooting (as is described in the book).

Let's break it down (very, very minor spoilers ahead!): 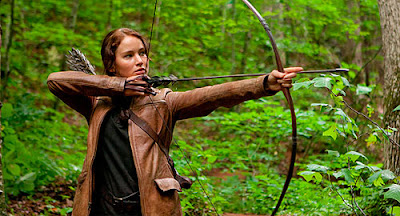 Katniss' (aka Jennifer Lawrence's) form
She looked good! There's a little bit of movie-exaggeration going on here. For example, she's pointing her left hand to steady the arrow on the bow, which shouldn't really be necessary. Her head is slightly tilted to the back and should be more of a profile (which makes for a less-pretty photo), but she's got the basics: both eyes open, elbow up, shoulders down. 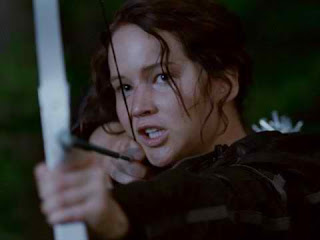 Here, you can see she's sort of pulling the string back to a weird place. We teach kids to pull the string back "to the corner of your smile," and adult archers anchor the string under the chin. In this shot, she's not really doing either. Where you pull back to doesn't matter so much as staying consistent, and it's just easier to stay consistent if you're pulling to your mouth or chin rather than a random point on the side of her face.


And her shooting form looks good! No fly-away hands, no yanking on the string, just a nice, smooth release. Which brings me to...


How Impressive is Katniss' Shooting?
Frankly, not that impressive. It's hard to tell in the clip above, but I would guess Katniss is shooting at a distance of maybe 30-40 meters, max. That's on the lower side of distances that Olympic archers shoot, and at that distance, hitting the very center of the target (in competition, this is called getting an X and it's worth 10 points) is not terribly difficult.

To give you a sense of athletic ability, make your hand into a fist. An Olympic archer could put 9 out 10 arrows into that fist while standing the distance of a football field. No special telescopes, no fancy equipment. Just a bow and arrow and a lot of skill.

The book goes into detail how she tosses things into the air and shoots targets all around the room, while running and rolling. But the movie cuts that out. Even Katniss' trick of shooting the apple from the pig's mouth isn't terribly difficult--she doesn't look too far away from the Gamemakers and the apple isn't outrageously small.

This is a little disappointing because there are uh-may-zing archers out there, and you can do some super-cool tricks. I would have loved for the movie to showcase what archers can really do, like blow out a candle with an arrow or shoot behind their back or hitting targets as small as quarters. In comparison, Katniss' shooting is a little ho-hum. 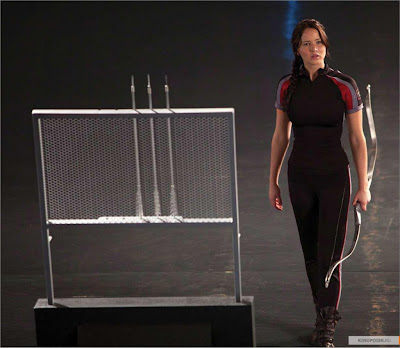 The Equipment
Not bad. It looks like she's shooting a traditional recurve bow without any of the bells or whistles used in competition. It's a pretty color, but all in all, it looks normal and not too fancy.

The arrows, too, seem typical and nothing crazy. My only complaint is that when the arrows hit the target (you can see it up in the video above), the points don't go completely into the target. In real life, these arrows would go into the target at least a couple of inches. Think about it: how effective is an arrow that only goes into prey half an inch?


Things that Made Me Go "Huh?"
Thankfully, there weren't really any moments in the movie that completely and utterly abandoned the laws of physics. But there were a few things that gave me pause.

The first happens early in the movie. Katniss goes to scare game into running and uses her bowstring as a slingshot for a rock. At this point, the husband looked at me and I gave him one of these. I mean, I've never used my string as a slingshot, and I have to imagine the rock would hit the bow before it hit its target. I dunno, I guess I wondered why she wouldn't just throw the rock?

I did notice, too, that there were a few times she seemed to have put the arrow on the string incorrectly, which would have caused it to veer wildly to the left. A very small detail, to be sure, but a mistake no serious archer would ever make.

Another thing that has me scratching my head is Katniss' affinity for shooting her prey through the eye. I'm not a hunter, but the range where I shot was part of a hunting store, and I'd chat with the hunters coming through. When they did target practice, using targets in the shape of deer, for example, they would always aim for internal organs, like the heart.

These archers took hunting seriously, and I heard many conversations about the quickest and most humane way to kill a deer. The consensus was to hit a vital organ, which would kill the deer within seconds. I think if you tried to shoot through the eye, there'd be a higher chance of missing and wounding--but not killing--the animal. Like I said, I'm not a hunter, so I could be wrong, but the shoot-through-the-eye trick always seemed to me to be a little off.


And In Conclusion
It was a lot of fun getting to watch archery on the big screen. Although I would have liked The Hunger Games to showcase it a little better, I still thought the filmmakers did a great job. Jennifer Lawrence certainly comes across as a believable archer and hopefully, in future films, she'll have the confidence and ability to try some of Katniss' cooler shots.

Finally, I am beyond-thrilled that the movie has led to an increased interest in archery. It's a great sport, especially for kids, and anything that gets kids excited about bows and arrows is a-ok in my book.

*I wouldn't have made it to the Olympics anyway. The idea was to get to the trials and experience it while training hard for the next Olympics, Beijing in 2008. But eventually I came to the conclusion that to really be the best, I would have to take a year off from school. I'm a nerd! I love school! And thus my Olympic dreams died.
Posted by Kendall at 12:00 PM