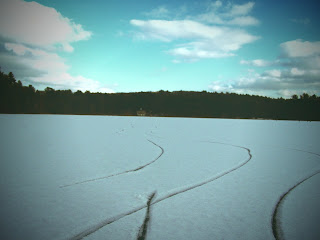 I’ve been thinking about something since reading Blood Red Road. I enjoyed the book, but there was a small point that jumped out at me. A good part of the story focuses on the heroine, Saba, as she realizes her own strengths as a leader and a fighter and emerges from her brother’s shadow.

But when Saba faces challenges, she almost immediately overcomes them, going from (supposedly) weak, passive, and subservient to her brother to strong, decisive, and capable within the first quarter of the book. The result is the huge transformation that she feels at the end of the book isn’t really realized for the reader, because the vast majority of the time, the reader has only seen Saba as a powerful and competent hero.

I don’t mean to pick on Saba or Blood Red Road—and indeed there's a lot that is beautifully done, notably, the growth and transformation of Saba’s relationship with her younger sister—because this seems to happen quite frequently in YA.

There are a few reasons I can think of. Books start where the action starts and it’s often this action that sparks change in the main character. Also, if you want your main character to undergo a huge transformation and you want them to end up powerful, capable, and likeable, by contrast you have to start them off as weak, incapable, and unlikeable. And there’s a big risk that the reader won’t stick with an unlikeable character.

So I can understand why these kinds of transformations can be hard to pull off. But when I think about some of my all-time top favorite heroes of YA, they’re the characters who came so far from where they started, who struggled and failed and kept fighting.

I think of Mary Lennox, described in the very first line of The Secret Garden as “the most disagreeable-looking child ever seen,” or Spirited Away’s bold and brave Chihiro, first shown slumped over in the backseat of her parents’ car, complaining about her new school. They’re spoiled, bratty, bored little girls who get dragged into adventure kicking and screaming. They meet challenges and fail, repeatedly, before they figure out who they really are and what they really believe in. They become heroes through their struggles, not because they successfully overcome everything thrown at them.

Even a character like Katniss in The Hunger Games, who, arguably, starts off very strong and ends very strong, undergoes a real emotional transformation. When we meet Katniss, she’s hard, guarded, extremely sure of what she wants and believes, and unwilling to compromise. By the end of the story, she’s softened considerably and begins to see the nuances of friendship, love, and trust. But even for Katniss, it’s a difficult process and she makes mistakes, second-guesses. It's a two-steps-forward, one-step-back process, and we're able to watch her stop and readjust herself.

One of the things that compels me most about writing YA is capturing the moments in time when a young person begins to figure out who they are and what they’re really made of. But as anyone who’s ever been a teenager knows, these changes take time, guessing, trial and error. There will be mistakes and hiccoughs and lots (and lots) of self-doubt.

Heroes don’t have playbooks. They don’t know the outcomes of their decisions until they happen. Even if they do what they think is right, they are often incorrect. And these things, which on the surface can seem like weaknesses, are really the points and moments that truly shape who these characters are. The road to heroism shouldn’t be easy.
Posted by Kendall at 9:53 AM