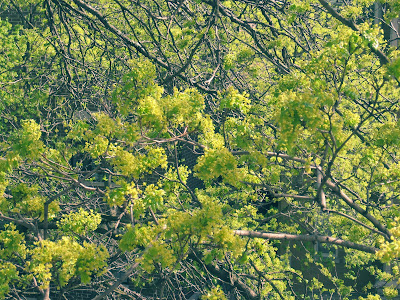 We were delighted to come home from vacation and see that the beloved tree outside our window had finally sprouted some little green shoots! Even though we've been turned into sniffly, sneezely messes, it's lovely to see some green outside our windows again.

This was a busy week in blogging! Let's get down to the posts:

The big news in kids literature this week was the arrival of the Harry Potter e-books! Nathan Bransford takes a look at why the Potter model for selling e-books is revolutionary and why other authors won't adopt it (and can I just say, while I often miss Nathan-the-agent, I am loving Nathan-the-tech-guy-who-can-also-explain-publishing)

Several agents wrapped up their trips to the Bologna Children's Book Fair. Mary Kole discussed how the foreign rights' demands have affected what she's looking for in the slush. Joanna Volpe breaks down just what an agent does at the book fair and why it matters. And Kristin Nelson makes an argument for bringing authors to Bologna.

Rachelle Gardner had a three-part series on how to make a living as a writer. Part one covers amping up volume, while part two discusses variety. Part three takes a look at the challenges writers face making a living off their work.

Those following agent Janet Reid this week know that she's been having a sort of slow-motion nervous breakdown as the result of reading 400+ entries as part of the Liz Norris Pay It Forward Contest. The good news for us writers is she's sharing tips for polishing manuscripts, including basic manuscript format. One her clients, author Gary Corby, has taken pity on her sanity and posted his own manuscript template.

Loved this one: Apartment Therapy posts images of the bedrooms of fifteen famous authors

Over at YA Highway, a discussion on YA book cover models who look suspiciously like famous actors

Holly Black put up an amazing breakdown of her daily word count while writing her latest novel, from first page to last edit

Justine Larbaleister reminds us all that "I'll Know I've Made it as a Writer When..." can be interpreted hundreds of different ways

That's it this week! Remember to check back this afternoon to see the latest round in the YA Character Championship, and have a great weekend!
Posted by Kendall at 8:25 AM