Ya Character Championship: Give It Up for the Thirteenth Century!

It's Day 4 of the YA Character challenge, with some strong showings from the Contemporary and Historical regions. Let's get down to it!

Woah, I totally didn't realize Cameron versus Hazel was like the war between two very brave teens struggling to overcome really terrible, devastating illnesses... Can we just say they're both winners and leave it at that? No? Okay, in that case, Cameron wins for his taste in music and angels.

And the curse continues as Hole's Stanley falls to quiet but strong Melinda of Speak.

And Between Shades of Grey's Lina wins against Infernal Devices' Tessa Gray.

Here's the Round 4 bracket: 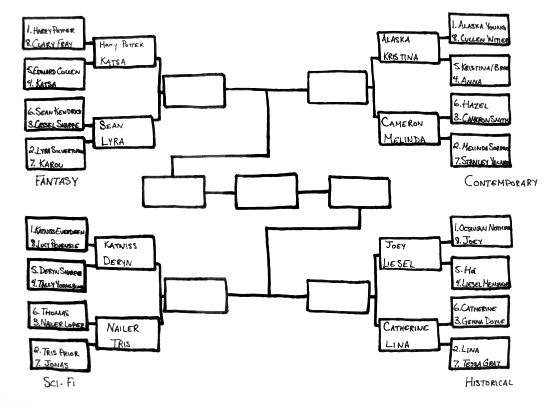 I've randomly selected the next two regions for tomorrow's battles, and they are.......Sci-Fi and Contemporary!

That means Katniss takes on Deryn, Nailer battles Tris, Alaska goes up against Kristina, and Cameron will duke it out with Melinda.

The first week is wrapping up and that means favorites are going to fall! If you have a character you're rooting for, let me know!
Posted by Kendall at 3:00 PM