My Big Ole Breakdown of the Cybils Books I Read

The 84 books I read as a YA Fiction judge for the 2012 Cybils represent a (somewhat) random sampling of what was getting published last year, and to get a better sense of what publishing looked like, I've put together a breakdown of the who, what, when, and where these books featured.

Please keep in mind that some of this (especially the plot points) is subjective and that I am about as far away from a statistician as one could possibly get. These are the aspects that most interested me, so if you're curious about any other distinguishing features (cover design, length, first person vs third person), let me know and I'll continue to update this post. 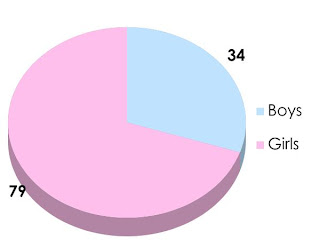 I counted 113 total narrators in 84 books. Breaking it down by gender, the girls beat the boys by more than two-to-one. 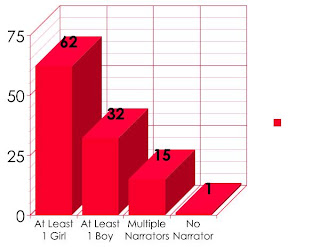 But if you look at the actual books, the numbers even out a little more, as more multiple narrator books tended to have one boy and one girl. The book with no narrator is October Mourning: A Song for Matthew Shepard, which is a book of poems told from multiple points of view, including inanimate objects. 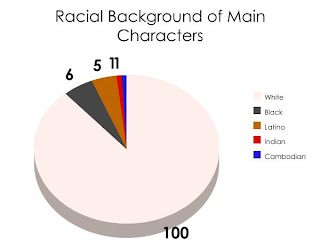 Looking at the racial background of the narrators, it's perhaps unsurprising that the vast majority are white, with only 6 (5%) black, 5 (4%) Latino, and less than 1% each Indian and Cambodian. I should note, though, that two books feature very strong secondary characters who are black: Me and Earl and the Dying Girl (Earl) and Boy21 (Russell aka "Boy21," who is also featured on the cover rather than the white narrator).

Other things I noticed about the main characters: all were "straight" except for one, who is lesbian (The Miseducation of Cameron Post), and one is intersex (Confessions of a Teenage Hermaphrodite, which uses the outdated term "hermaphrodite" to describe the intersex main character). 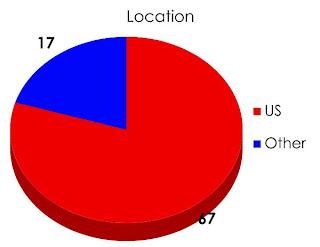 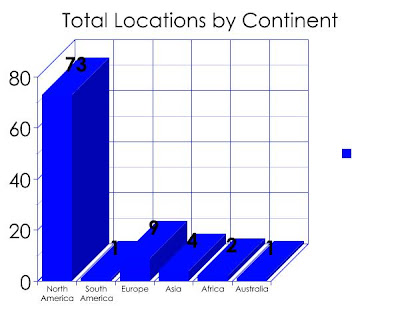 By continent, that means that North America is the most popular location, with Europe and Asia taking the second and third spots. Here's the full list of non-US locales: 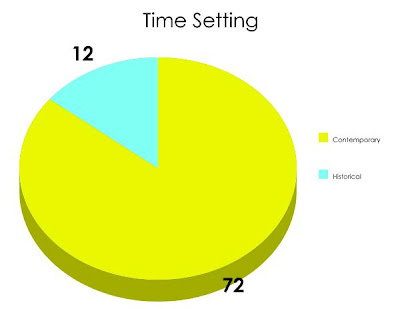 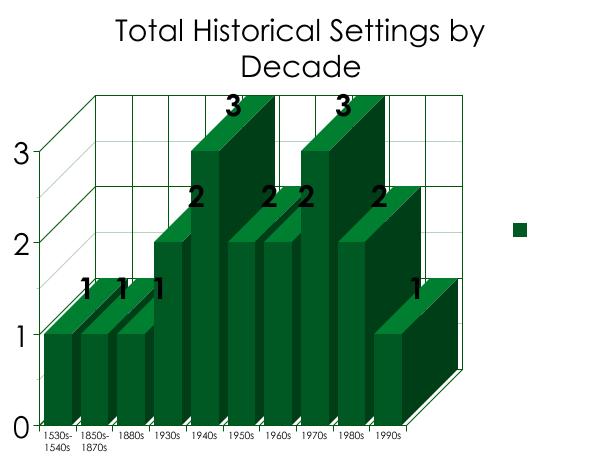 I've enlarged this graph a bit so you can better see the years at the bottom. Math people will notice that these numbers don't equal 12; that's because I've broken it up by decade, so that a book that takes place from 1930-1950 (for example) would be counted as taking place in the 1930s, 40s, and 50s. Here are when the twelve historical novels actually take place:


When looking at plot, I compared books on two of the most prevalent themes: romance and death. 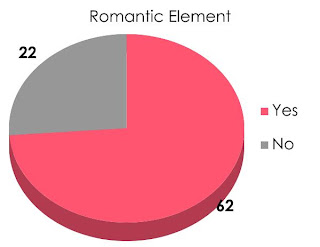 Here, most YA books had some kind of romantic plot, which isn't surprising considering I've heard YA editors say they don't think it's possible to publish YA that doesn't feature romance. But I thought it was interesting that if you look at the shortlist, three of the seven (Endangered, Code Name Verity, and Me and Earl and the Dying Girl) don't feature a romance, while three more (The Theory of Everything, Boy21, and I Hunt Killers) have characters already in relationships when the novel begins, and so the relationship doesn't have a strong impact on the overall plot. In fact, only The Storyteller puts a romantic element front and center, which should offer some encouragement to writers tired of sticking an obligatory romance into their books.

I considered a book to have a death element if a character dies during the book or if the main character grieves someone who died before the book begins. 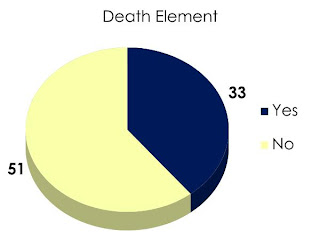 I was actually surprised to see that a majority of books didn't feature a death, because my fellow judges often noted how dark the Cybils list seemed to be this year. But, again, looking at the shortlist, every book features a death, almost every death is violent and unexpected, 2 books feature serial killers, and 2 feature genocide and torture. It's hard to parse out meaning from this, and I'm not sure what the takeaway is--maybe that death ups the stakes, makes us care more? I'd like to believe it's possible for a book to be a critical success without some intensely dark element, but I can think of only two books that made it to our last-round discussion that didn't feature a death. 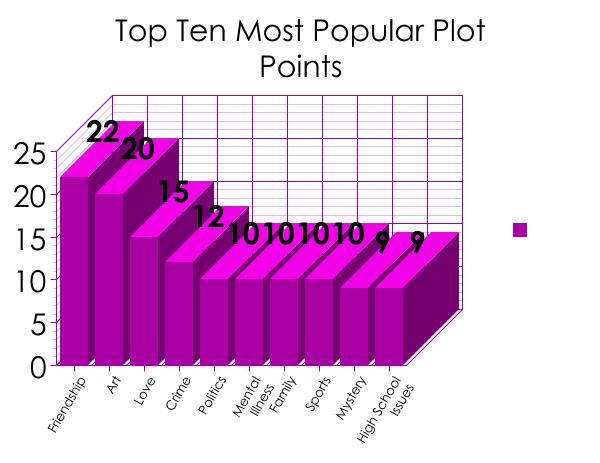 This is probably the most subjective aspect of this breakdown. I looked at all the books and wrote down for each the themes that most jumped out at me, then added up how many books touched on those themes. A little explanation: "friendship" means books that deal primarily with a non-romantic relationship, "love" means books that deal primarily with a romantic relationship, "art" means the plot focuses on some kind of art (music, drawing, photography, etc), "crime" includes characters who broke the law as well as plots that deal with criminal activity or criminals, "politics" means books that feature political revolutions or societal upheavals.

Other popular themes, in order of most to least common:

There you have it! My breakdown of the books I read for the Cybils. I hope you found this helpful and again, if there's another topic you'd like me to look into, please let me know.
Posted by Kendall at 1:34 PM