Wrap Up: Ready for Fall 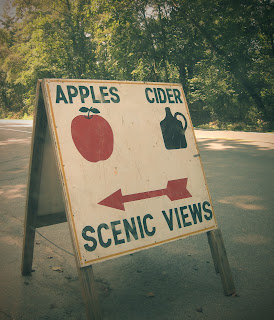 Ooooh, fall. How I missed you! A few weeks ago the husband and I were with family in Virginia when we stumbled on this wonderful apple farm at the top of one of the biggest mountains in Charlottesville. The sign made pretty good on its promises: lots of apples, lots of cider (in donuts! in slushies!), and lots to look at, scenically.


After the summer hiatus, I'm ready to jump back into the weekly blog wrap up! For you new visitors, every Friday I post a list of the funniest, best, most interesting blog posts I discovered over the past week. If there's anything you found that I missed, I'd love for you to share in the comments!


Julie Eshbaugh at Pub Crawl gives some tips and tricks on how to chart your story's rising action to see clearly where parts in your manuscript might need to slow down or speed up. Leigh Bardugo discusses how authors use music to inspire or set the pace of their novels (for me, it was basically the Decemberists, always, over and over and over). And Jay Kristoff gives his perspective on the challenges and perks of working with two editors at once.

Mediabistro's Galleycat blog had some wonderful posts this week. My favorites were the list of librarian rules for reading from 1937 and the top-fifteen most-nostalgia-inducing books (warning: you may be tempted to camp out in the children's section of the library after reading).

Over at Cupid's Literary Connection, there's a fun contest/auction going on. 100 writers have submitted their queries and the top forty will be open to agent requests. It's worth checking out just for the sheer number of different (and great) queries! Also, until midnight tonight, Cupid is running an auction with prizes including query critiques and phone calls with top agents--looks amazing!

Scott Westerfeld republished an essay (from 2010) about the appeal of dystopias for teens (who, when you think about it, live in a world where they often can't eat, wear, or do what they want)

Just a whole lot of ugh: agent Pam van Hylckama was allegedly attacked by a disgruntled writer who she rejected. I don't know what's worse, this or that agents regularly get hate mail and death threats just for doing their job

Starting with a great post by Hilary T. Smith on the intimacy and appeal of bookshelves, the folks at YA Highway shared photos of their bookshelves, with some more great reader photos in the comments