YA Character Championship Round 10: WE HAVE A WINNER! 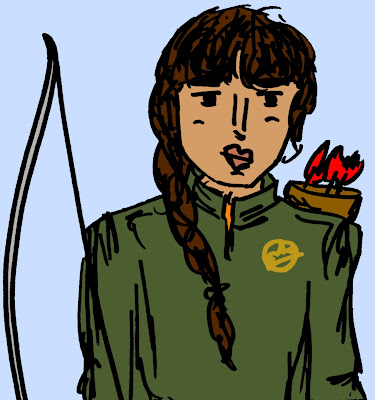 Yes! After two weeks and thirty-three battles, the winner of the 2012 YA Character Championship is KATNISS EVERDEEN!

This was a crazy-hard battle, but Katniss prevailed, shooting and interviewing and movie-premiering her way to victory!

What makes Katniss the winner? It's the year of The Hunger Games, with record-breaking movie sales, record-making book sales, and a whole army of etsy crafters keeping the girl-on-fire first and foremost in our minds. She's tough, persevering, and cares more about keeping her family alive than the two moony boys fighting for her affections. Plus, with (at least) two more movies to go, we've got plenty of Katniss-love to look forward to.

I give you the winner of the 1st annual YA Character Championship, Katniss Everdeen!
Posted by Kendall at 3:00 PM