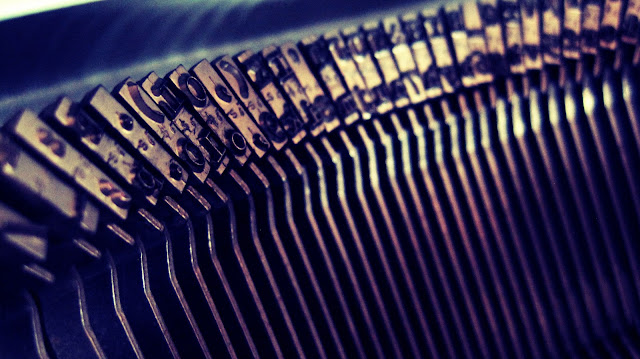 This week, I decided to play around with my camera a little and took some super-up-close* photos of my beloved typewriter. This is one of my favorite pictures from the day, showing the inside of the typewriter and all the keys perfectly lined up.

Even though I don't use my typewriter much (don't want to run out the ribbon / those keys are hard to push), I like pulling it out every now and then to look at it and play with it.

It always boggles my mind how beautifully and precisely engineered typewriters are, that even though they're low-tech, my typewriter is probably one of the more complex pieces of machinery in my entire house.


Another great post on plotting and pacing from Mary Kole, this time about how to make sure your characters' past relationships and experiences grow and develop over the course of the novel

I've literally used this advice about five times already this week: Lee Child, author of the Jack Reacher novels, on how to create suspense

Some other Cybils judges have been breaking down their reading experience; here's Tanita Davis discussing what she read as a YA SF/F judge (also: she read 199 books! Makes me feel like a slouch)

Publishing Crawl asked writers about the lessons they learned in 2012 and what they hope for 2013. They also featured a day in the life of an author prepping for a book launch with Incarnate author Jodi Meadows, as well as a guest post by Penguin online marketer Rachel Geertsema on the ins and outs of social media and online marketing

For all you Divergent fans out there, some casting news on the series' upcoming movie adaptation

Loved this. Reading can be a wild experience.

George R. R. Martin released a chapter from The Winds of Winter, the next book in the Song of Ice and Fire series!

Agent Molly Jaffa started a new blog for 2013, Between the Pages, and has already posted a great guide to how querying writers can use Twitter to get the attention of agents

Have a great weekend, everyone! I'm off tonight to up my Oscar-movie ratio (currently 1/9) by seeing Les Mis with the husband. Husband is a Les Mis fanatic, starred in the musical in high school (playing that mean cop guy**), saw the musical between 6-12 times,*** read the book (seriously! do you know anyone who's actually done that?), and has been talking about this movie literally since last Spring. I'm pretty sure I married a tween girl.

*I'm not a photography person, but there's a word for that, right? Macro? Micro? Whatever.
**No, I don't know his name and no, I'm not going to Google it.
***"How many times have you seen Les Mis?" I asked.
"Professionally? Like, not including high school productions?" he said.
"Yeah."
"I don't know...maybe...ten to twelve times?" (I start laughing) "Why? Is that a lot?"
"Double digits?"
"Okay...maybe just...ten times. Eight. Or...more than six, at least." (pause as he thinks) "Are you going to put this whole exchange on your blog?"
Posted by Kendall at 8:55 AM