It's Day 2 of the YA Character Bracket, my silly experiment in trying to remain relevant during basketball season!

The big news today comes from the Historical region. Top seed Octavian Nothing, traitor to the nation, has been defeated by War Horse's Joey! Was it Joey's kind spirit and enduring courage that trumped Octavian's Enlightenment sensibilities and dubious parties? Or did I just secretly want a horse to win this whole thing? The world may never know...

Meanwhile, Liesel Meminger knocks down Ha, via a vote from my mom who thought "pluck" had nothing on loving books so much that you're lead to a life of crime. Crime!

And in Contemporary, Alaska Young handily out-quirks Cullen Witter, while sweet Anna of Anna and the French Kiss learns the hard way to avoid meth addicts who go by two names.

Here's your Round 2 bracket: 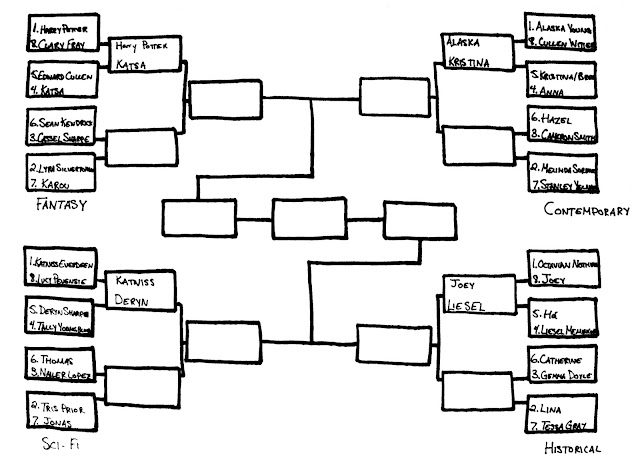 In the Sci-Fi region, the boys fight it out! Thomas from Maze Runner meets Ship Breaker's Nailer--they survived devastating ecological disasters, but who will survive the bracket?

And last but not least, Abnegation-turned-Dauntless Tris Prior, of Divergent, dukes it out with The Giver's kind-hearted and courageous Jonas.

Cast your votes and check back tomorrow!
Posted by Kendall at 3:00 PM