YA Character Championship Round 3: Battle of the Boys

It's Day 3 of the YA Character Championship, and things are heating up!

For some reason, without thinking, I lumped a lot of the boy characters against each other, which means two-thirds of them got knocked out in the first round. Whoops. Sorry guys! But at least they made for exciting match-ups!

In White Cat's Cassel versus Sean of The Scorpio Races, Sean's preternatural calm and magical instincts pull ahead (maybe Cassel was recovering from particularly bad blowback and/or a run-in with his crazy mother?).

Fiesty Lyra Silvertongue wins out against Daughter of Smoke and Bone's Karou, because hamsas can't do nothin' against alethiometers.

In Sci-Fi, boy-genius Thomas of The Maze Runner falls to the street-smart and brave Nailer.

And in our last battle of the day, Tris from Divergent handily defeats The Giver's Jonas.

Here's the bracket for today: 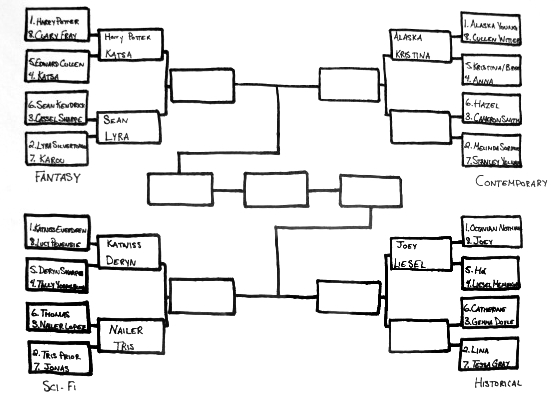 Check back tomorrow, when Hazel of The Fault in Our Stars goes up against gnome-totting, mad-cow-disease-infected Cameron from Going Bovine, and Speak's Melinda battles Stanley of Holes!

And in the Historical region, witchy lady-in-training Gemma Doyle will duke it out with the original Catherine called Birdy, and The Infernal Devices' Tessa takes on Lina of Between Shades of Grey.